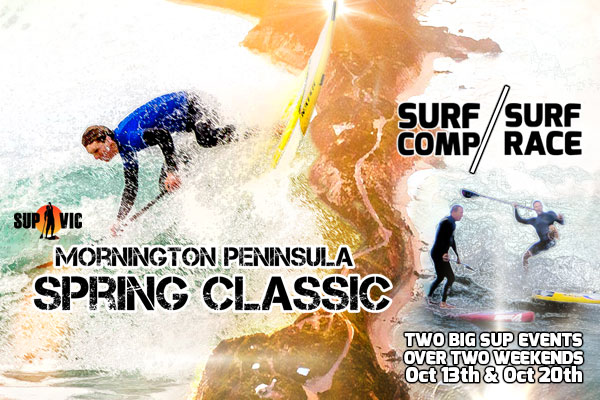 The Mornington Peninsula Spring Classic will be fondly remembered by all competitors, organisers and spectators alike. The Spring Classic delivered two separate events for the SUP disciplines of surfing and surf racing.

The SUP Vic surfing sub-committee, with two successful West Coast events under their belt, set a goal for the Spring Classic of providing the best possible conditions for both the surfing and surf racing. Permits were obtained for a handful of the Peninsula’s best surf spots and holding period set to provide us with the best possible chance of achieving our goal. You be the judge but we reckon we scored!

Following a postponement for the first date of the waiting period due to average conditions, the surf comp was called on for the following weekend with a forecast for some solid swell, offshore winds and a sunny 29 degrees. On first inspection of the reef, the morning of the comp, Point Leo was looking about as good as it gets but the tide was a bit low and the offshore was howling. A slightly delayed start saw the first round heats head out with the option of picking off the big bombs out the back in the wind or surfing the inside section under the protection of the headland. By the third round the wind had backed off, the tide had filled in and the reef was firing. 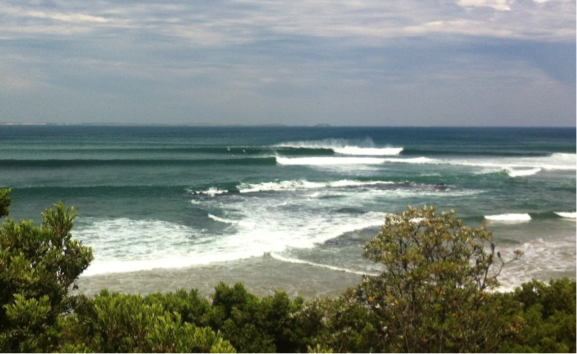 Each competitor surfed a minimum of two heats with the finalists lucky enough to get back into it a third time. At the end of the day the results were as follows: OPEN MEN 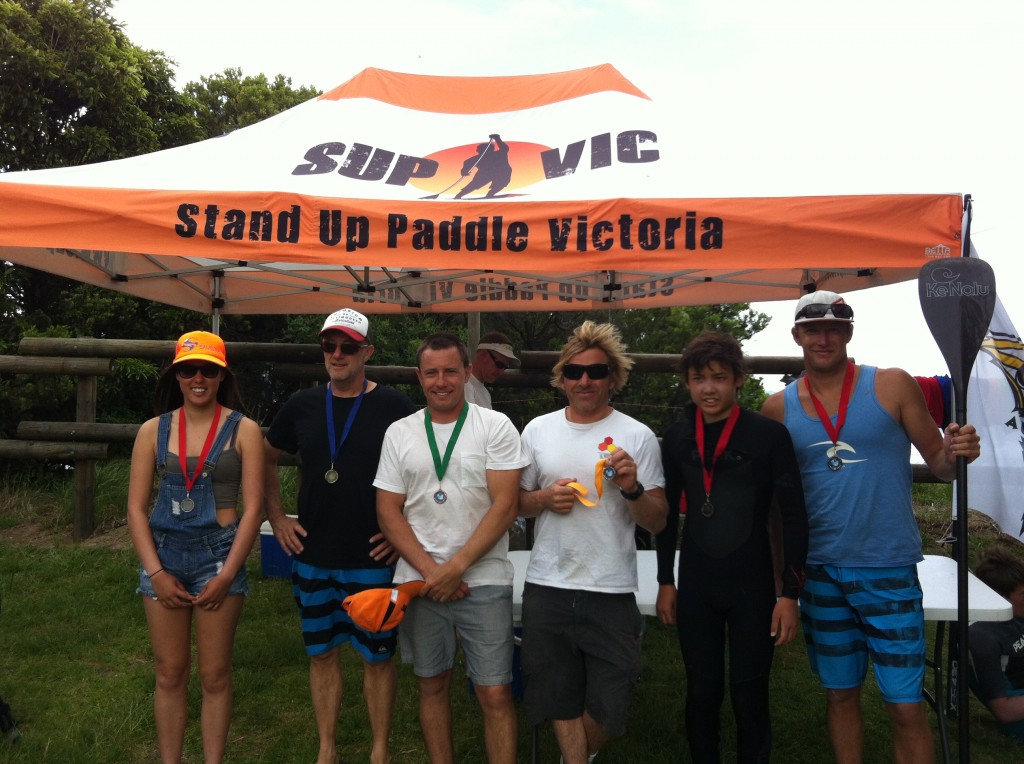 1st Chris Clarke 2nd Brendan Nachtigal 3rd Michael Jenkins 4th Leon Blachos OPEN WOMEN 1st Kristi Page JUNIORS 1st Kenta Fergusson     A great time and great waves were had by all. The word “epic” was heard regularly throughout the day in relation to the waves, the weather and the quality of the surfing. Many thanks to SHQ Boardsports for their surf event sponsorship, prizes and providing their fleet of JP demo boards for the crew to drool over. 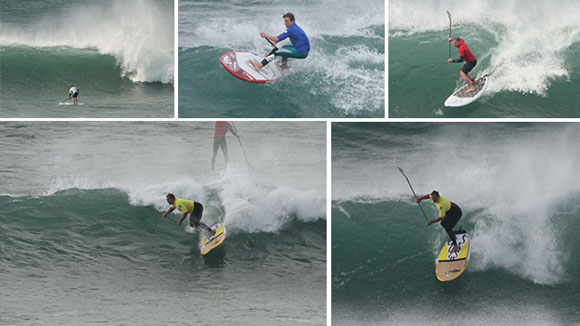 The weekend after the surf comp found us back at Pt Leo but this time with the race boards and the SUP Vic fleet of N1SCO 12’6” inflatables. The request for a repeat of the warm sunny day we had for the surf comp didn’t eventuate, instead we were greeted with intermittent sunshine, a light onshore breeze and 2’ of swell. A course was set to have competitors paddle out across First Reef to the first buoy turn then ride waves in to the second buoy in the shorebreak. From here competitors paddled out the back of Second Reef where they rounded another buoy to again ride waves through to the shore for a short beach run. Then back out through the surf to the First Reef buoy and surf all the way to the finish line. All paddlers were catered for with Men’s 12’6”, Women’s 12’6” and a paddle whatever you’ve got, whatever you want Fun category. 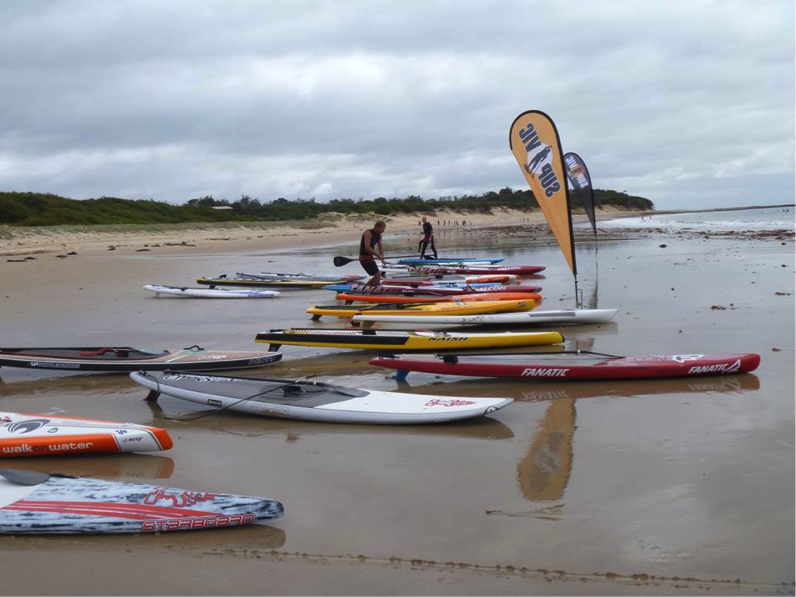 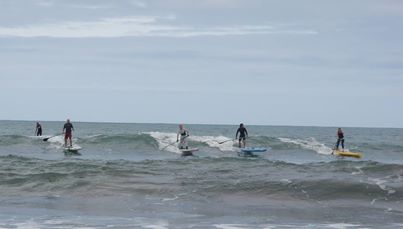 Two hard fought races were run with the lead changing several times in each. The final results of the competitive categories were: MEN’S 12’6” 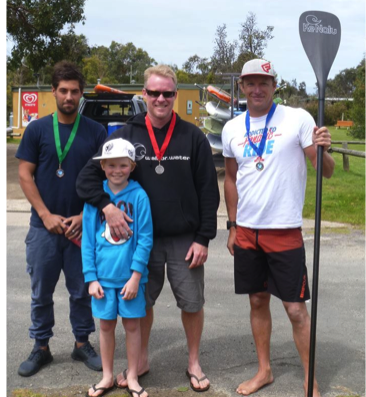 1st Lucy Bell 2nd Jean Ringrose Coyne 3rd Kathy Naoumidis             Following a short break it was time for the N1SCO 12’6” inflatable relay races. A short sprint course was set out across the reef and back and the paddlers were divided into teams to start discussing tactics. Two races were run providing the highlight of the day with no shortage of thrills, spills and carnage. The camaraderie amongst the crew cheering on their team mates was fantastic. No one remembers who won and it didn’t really matter anyway. Fun was the big winner. 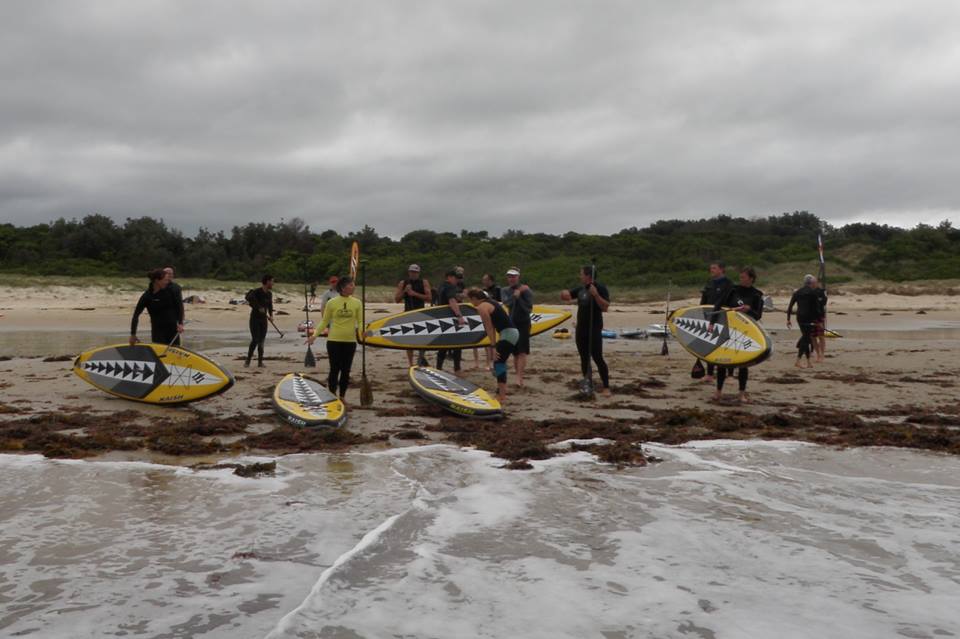