Stand up paddling comes to the 2013 Frankston Water Festival with the inaugural running of the Vic Open of Stand Up Paddling. Races over 10km, 6km and 1500m on January 19 and 20, 2013. Spectators will get a great view on Sunday with the running of an inaugural SUP X event where competitors have to negotiate a number of buoys to test their paddling skills and board handling and turning ability. Competitors from Victoria and interstate will be taking part in the event which is the SUPA Victoria stand up paddling  flat water championships. More: http://www.supvic.com/event/supa-victorian-open/
http://www.supvic.com/wp-content/uploads/2012/08/VicOpen_slider.jpg 395 600 SUP Vic http://www.supvic.com/wp-content/uploads/2013/06/SUPVIC_Logo_B.png SUP Vic2012-12-21 08:48:552013-01-21 02:18:15SUPA VIC Open of SUP

Sunday 2nd of December saw the running of the 3rd annual Great Melbourne Paddle at the new location of Sandridge Beach, Port Melbourne.  With fine weather and light to moderate winds the location proved to be an excellent choice providing a protected run at the west end of the beach as well as spectacular views for racers and spectators alike.
The event got underway early with Sup manufactures and retailers showing there wares on the beach as part of our Sup Expo.  With a large range of the latest racing designs made available to some lucky racers who got in early to grab a demo for the race.
The 12k elite race got underway just after 9am with a beach start.  The fleet included international Naish team rider Jake Jensen as well as Dale Chapman and Alain Teurquetil from DC Stand Up Paddleboards, all from Queensland.  The course was a 3k rectangle with a protected run at the west end, a downwind leg and some head wind slogs, culminating in a buoy turn just metres from shore to start the next lap.
Luke French and Cam Hosking fought out a close tussle for the whole race in the Mens Open with Luke taking the honours by 17 sec. at the end with Jake Jensen coming in 3rd.  Dale Chapman took out the Mens Masters (6th overall) and Alain Teurquetil taking out the Mens Grand Masters (over 50).  Jean Ringrose won the Womens Open in another display of her dominance of the Vic races.
The 6k race started 5 mins. after the elite race and was two laps of the same course.  It was great to see lots of new faces competing for the first time and getting to mix it up with the elite racers.  Brian Logue of WOW boards was the first over the line in the 6k Mens race followed by Emma Morris to take out the 6k Womens race.
While the main race was in progress the Dogman kept the spectators amused with his insightful commentary on the mike, as well as his post race interviews with the winners.
The Kids race was next up and we were greeted by an enthusiastic bunch who couldn’t wait to get on the water.  With an onshore wind kicking in we decided to start them 100m off shore and let them sprint for shore.  Eloise Morris was first over the line to win the Girls race and Michael Parks was next to win the Boys race.
The final event was the inaugural Supvic Sprint race which saw a large proportion of the racers take part.  This was a 200m sprint from out the back, straight to shore, with the finish line just metres from the shore.  Tom ‘Lightning’ McQueen won the Mens and Emma Morris won the Womens.  Tom is now the holder of the perpetual Golden Paddle Sprint trophy.
That just left the presentations and the lucky draw prize give aways.  All race winners received the GMP traditional hand made wooden trophies, courtesy of Dave Hunt, and place getters received framed certificates, designed by Tim Patterson.  The Outstanding Sportsmanship award from Highly Tuned Athletes went to Louise Thomson.
Three lucky kids got to take home brand new skateboards thanks to Globe.
All entrants received two Go Natural protein bars and a tube of Island Tribe sunscreen.
Thanks to all our sponsors for supporting the event, the food and beverage suppliers for keeping everyone fueled up and our boat support crews for keeping everybody safe on the water.
– Alan Fairlie, Race Director
http://www.supvic.com/wp-content/uploads/2012/12/IMG_5664.jpg 1024 683 SUP Vic http://www.supvic.com/wp-content/uploads/2013/06/SUPVIC_Logo_B.png SUP Vic2012-12-21 07:54:072013-03-21 14:11:152012 Great Melbourne Report

25 SUP VIC Members are joining Ryan on the final leg of his mammoth trip from the Gold Coast to Melbourne this Saturday, to welcome him in.  All paddlers are donating money for the privilege of paddling through the shipping lanes and into the docklands, for what is promised to be an awesome experience. —– On November 4th 2012 Ryan Fulton will begin his stand up paddle journey from the Gold Coast to Melbourne to raise funds for the Heart Foundation. The feat has never been done on a stand up paddle board, and will put Ryans name not only in the record book, but he’ll go down in history as one of BIGGEST PADDLES EVER by a single bloke. Heart Disease is the leading cause of death in Australia. At least 5 of Ryan’s close family members have passed away or been affected by heart disease, so on his 2 month journey Ryan aims to spread the message that through exercise and healthy living, heart disease can be prevented. To make a donation: http://everydayhero.com.au /ryan_fulton Follow Ryan’s journey on FACEBOOK: ‘Ryan’s Paddle for Prevention’ 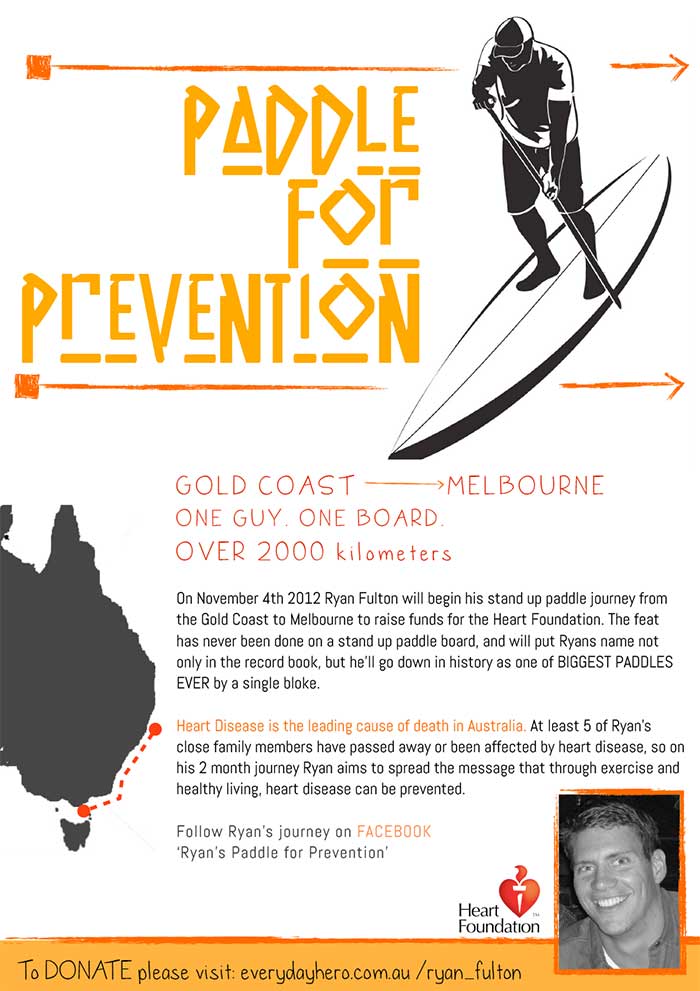