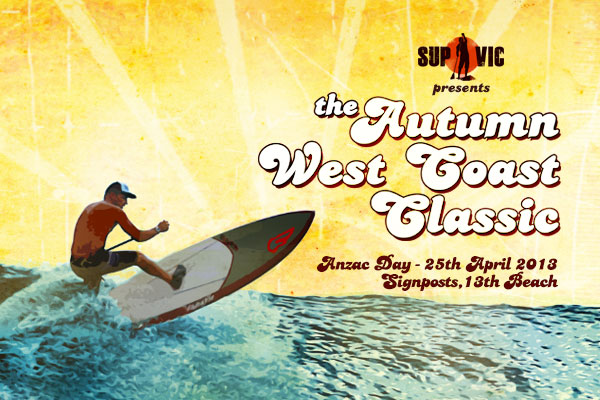 
Well what a 1st event for the SUP Vic Surf Team, having been studying the swell for the previous 2 weeks we new that the event at Signpost was going to be EPIC with 3m swell on the cards.  The call was made to hit the carpart at 6.15am and with the roar of Souther Ocean Swell in the background and a flicker of dim light on the horizon the SUP Vic Marquee was hoisted high. An army of volunteers eagerly appeared and in record time the tents were up the traffic management inplace registrations were being taken and the heat draws were being adjusted for last minute entries. 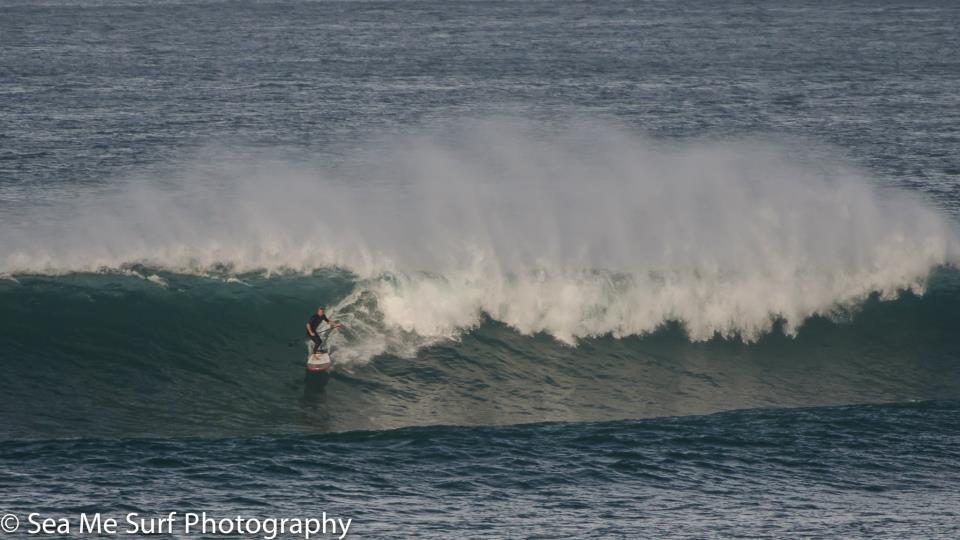 Kristi rejigged the heat draws as the junior decided the would join the mens division, the judges were organised and the hooter went off for round one. The men were up first and you had to bring your A game as Signpost greated you with some 4 – 6ft sold close out sets as you arrived at  the bottom of the stairs.  We adjusted the paddle out time to 10 mins so the boys could negotiate the shorey and the game was on!
In each round peope put the pedal to the metal and there was not a feint heart amongst them, the roar was going up from the increasing crowd watching epic wipe outs and just as many smokin rides.  Half way through the first round some of the local boys from the 13 Beach Board riders and the Soul Longborders pulled up to see what these crazy SUPers were up to. Everyone joined in the cheering and wincing as contestant after contestant laid it on the line.
The key to making it through the heats was easy, pick your bomb knowing it was a 1 or 2 turn maximum opportunity paddle for it balls to the wall  survive the drop and bust a move a big move. The ratio of success was pretty slim but those with courage were rewarded and just as often caned for good measure. 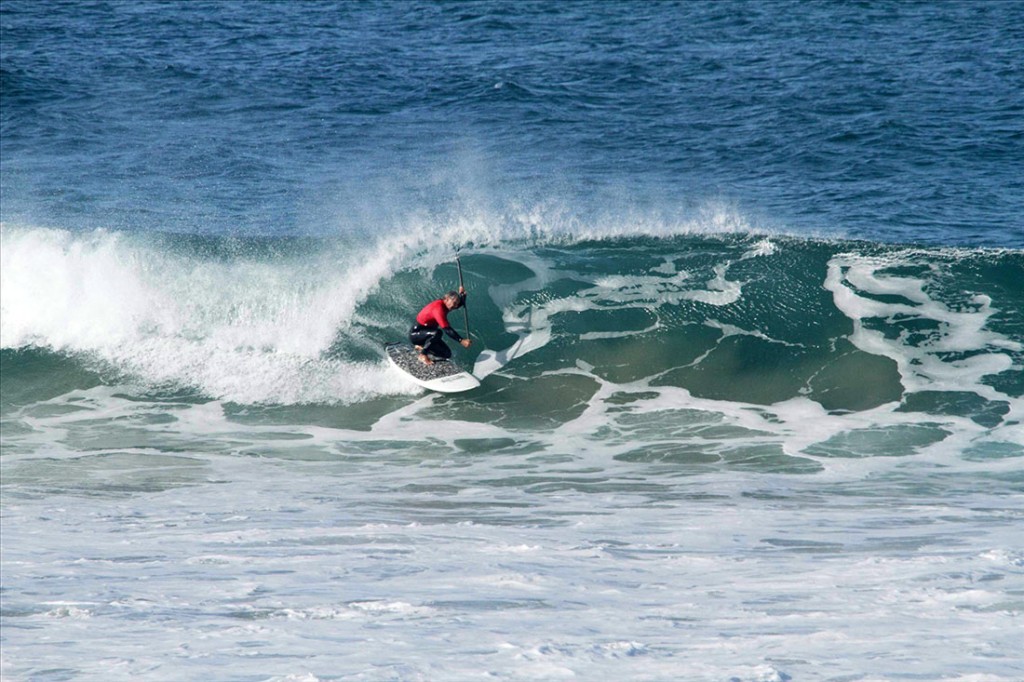 At the end of the 1st round we had the following result:
Requals

The Women’s straight final was run after the requals as the conditions looked a little more  friendly, but dont get me wrong there was no easy heats on this day. I think everyone would agree the courage shown by these girls was epic as most of the crew were 1st timers in this size surf. We stationed several of the guys on the beach just in case they were needed and the girls paddled out. They simply did not give and inch for the whole 20 mins. All the girls caught waves with Lucy and Kristy being the standouts, each chose a different tactic, lucy took some great inside waves and Kristi went for broke and tackled the outside bombs but with less success and  at the end of the Final the results were:
Women’s Surf Results:
Lucy Bell 1st
Kristi Page 2nd
Kathy Nouamidis 3rd
Jean Ringrose Coyne 4th
Ann Thompson 5th
The whole crew gave these girls a big cheer as they climbed the steps exhausted but with huge grins on their faces. What an achievement!

Following a great morning of surfing in tough conditions it was time for some BOP racing. Given the conditions, solid 6’ surf and 20 knot plus cross shore winds, it was decided to relocate to the only other venue we were permitted to use on the busy public holiday. On arrival at Queenscliff we were greeted with small offshore waves peeling along a shallow reef. Prior to setting the course we had to get out there for a bit of surfing on the race boards….smiles all round!! It was decided to set a course that forced competitors to paddle out and back through the most challenging line across the reef, followed by a short beach run carrying boards around a flag, then back out to a deep water navigation marker and back to the start for the next lap. Time was against us as the outgoing tide seemed to be sucking the swell out of the bay and the rocky reef was getting shallower. 10 competitors lined up for the le mans start and we were off for a quick sprint around the 2 laps of the course. At the front end of the field, Dean Elcoat held off Chris Clarke up until the final leg where he powered past with 50m to go to take the win. Throughout the field similar battles were taking place. The men’s finishing positions were: 1st Chris Clarke 2nd Dean Elcoat 3rd  Michael Jenkins The women’s finishing positions were: 1st………………Jean Ringrose Coyne 2nd ……………Lucy Bell 3rd ………….Kathy Naoumidis Fun was had by all and I’m sure everyone eagerly awaits the next race!! 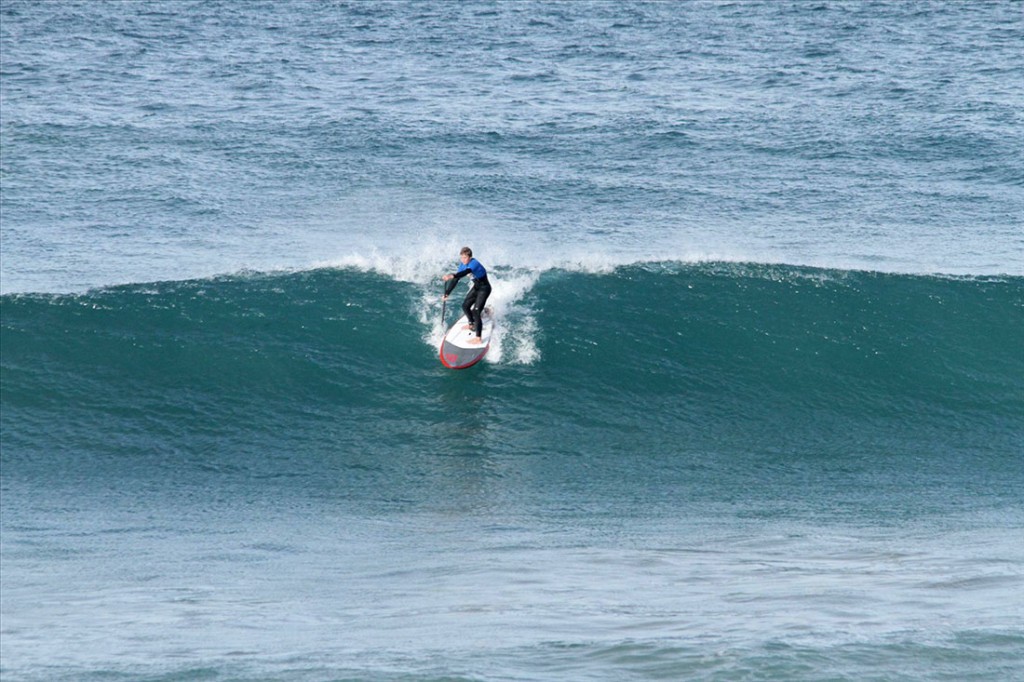 The SUP VIC Annual General Meeting will be held on Sunday 26th May. The meeting will commence at 5pm. The location is nominally planned as upstairs at Hobsons Restaurant, Sandringham (to be confirmed).
As always, the first order of business will be the President’s report and the Treasurer’s report in order to provide the membership with an overview of the state of affairs, the year in review and the plans going forward. We will also be presenting awards to the winners of the Flat Water Championship series held over summer, along with some awards from the recent Autumn Classic surf event held at 13th Beach.
Following that, we will proceed to elect a committee, including office bearers – President, Treasurer, Secretary, and we will also be electing a Vice President, as per the terms required by Consumer Affairs Victoria for incorporated associations. At this time, Michael Jenkins, Janette McMaster, Jean Ringrose and Dave Hunt have decided not to nominate for re-election as general committee members. Likewise, Ross McClure has indicated that he will not continue as Secretary. However, Tim Patterson, David Peterson, Alan Fairlie, Stuart Thomas, Rob Wong, Warwick Lee and myself will happily serve another term, if that is the will of the membership.
Naturally, if any financial member of the club feels that they have something to contribute at committee level, we would very much like to encourage you to consider nominating. We are particularly eager to welcome contribution from those with organisational and co-ordinating skills to oversee the newly established SUP Surfing initiative, along with membership drives, non-competitive social events and community engagement programs.
We also plan to take care of some house keeping matters to conform with Consumer Affairs requirements for incorporated associations. Among these are the adoption of new model rules for the club, a change to the registered address of the club, a change to the financial year (in order to align with the club’s seasonal operations), establishment of the new Public Officer (which will be the newly elected Secretary), and acceptance of Purpose of Association. These house keeping matters have already been ratified by committee so they shouldn’t take long to attend to at the AGM.
As always, we plan to keep the meeting as brief as possible, and then we invite all those interested to stay back and join us for dinner.
Hope to see you there.
http://www.supvic.com/wp-content/uploads/2013/05/sv-agm1.jpg 400 600 SUP Vic http://www.supvic.com/wp-content/uploads/2013/06/SUPVIC_Logo_B.png SUP Vic2013-05-05 16:42:042013-05-06 10:57:08Notice of AGM